About Super-Capacitor in Volvo Cars 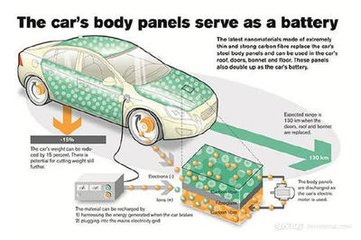 First let's look at the capacitors and Super-Capacitor:

Capacitors:  A device that holds a charge. They are used for blocking, coupling, bypassing, filtering, tuning loops, energy conversion, and control in circuits.

For electric vehicles, the heaviest component is the battery. But weight is the enemy of efficiency. In order to spread the weight, Volvo has developed a new design that puts the body into a battery by putting a Super-Capacitor into a carbon fiber board.

We know that Volvo and other European companies are involved in a project funded by Europe.The project is to combine nanostructure batteries and Super-Capacitor into portable, environmentally friendly energy storage.

Super-Capacitor have faster charge and discharge rates than current lithium-ion batteries used by automakers, while still storing more energy in smaller volumes. Depending on the application, you can get 10-100 times the energy of a conventional battery from a Super-Capacitor under the same weight. This is very attractive for car manufacturers.

Then Volvo and his friends produced a Super-Capacitor with nanostructures, The Super-Capacitor is then sandwiched between a carbon fiber and a polymeric resin sheet. Replace the combination of the bonnet and the torsion bar with a Super-Capacitor plate so that Volvo engineers can replace the battery that powers the car electronics while halving the weight.

Taking this concept a step further, Volvo rebuilt a hood with this supercapacitor, turning it into a battery that can be recharged with a kinetic energy recovery system or a standard plug.

The car body becomes a battery. Volvo estimates that parts such as doors, trunks, and roofs can be replaced with this new material, reducing overall weight by 15%. But it's not completely safe. Although supercapacitors are considered an artifact of energy storage, both capacitors and carbon fiber materials are relatively inexpensive. But they bring security issues.

Volvo engineer Per-IvarSellergren said: "By decentralizing many of the low-voltage areas of the car and affecting the isolating switches between the zones, the risk of body damage is magnified .Lighter components mean they can absorb less impact energy, but Volvo still requires it to achieve the same impact test results of other Volvo cars.”

Volvo still needs to solve the problem of safety and component replacement costs, and it is impossible to mass-produce new products in the short term.

Capacitors are one of the most widely used electronic components in electronic equipment. With the development and attention of Volvo's automotive capacitors, the current replacement of capacitors is also very fast, so the slow-moving inventory of capacitors has become the most Distressed problem.

ExcessChip specializes in recycling various capacitors, redundant, old-fashioned.as long as you have trouble with these slow-moving inventory, welcome to contact us.